The mechanism behind Evedol is scientific.

The ingredients used in Evedol contain components that help women address several sexual problems and offer several health benefits as well, to provide them with a healthier life. Each ingredient in this formula for effective female enhancement was widely researched by our medical team.

The key thing that makes Evedol stand alone as the ultimate “sex pill for women” is the fact that we only selected ingredients which have clinical studies proving they work!

The Evedol formula contains a potent and effective combination of herbal ingredients which have shown to improve several aspects of female sex drive. 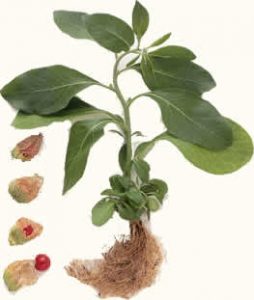 In Ayurvedic, Indian, and Unani medicine, ashwagandha is described as “Indian ginseng.” Ashwagandha is also used in traditional African medicine for a variety of ailments. Ashwagandha is specific for a wide range of conditions including arthritic inflammation, anxiety, insomnia, respiratory disorders including emphysema, asthma bronchitis and coughs, nervous disorders, gynecological disorders, especially functional female and male infertility and impotence.

The use of ashwagandha in Ayurvedic medicine extends back over 3000 to 4000 years to the teachings of an esteemed rishi (sage) Punarvasu Atriya. It has been described in the sacred texts of Ayurveda, including the Charaka and Sushruta Samhitas where it is widely extolled as a tonic especially for emaciation in people of all ages including babies, enhancing the reproductive function of both men and women (Upton, R. et. al, American Herbal Pharmacopoeia, 1996.

#1: The unique properties of ashwagandha, while being an energy tonic like ginseng or codonopsis for instance, is uniquely more beneficial for calming the mind, relieving arthritis and building sexual energy while ginseng and codonopsis (Codonopsis pilosula also known as ‘bastard ginseng’ because it is an acceptable milder substitute) is more specifically effective for low energy caused by digestive weakness. Astragalus, classified as another Qi or energy tonic in Traditional Chinese Medicine (TCM), is stronger as an immune tonic. Again, these properties are equally shared by ginseng, codonopsis and ashwagandha, but more indirectly because of their effects on other physiological systems. Ashwagandha is also useful for strengthening the female reproductive system for which it is commonly combined with another Ayurvedic herb called shatavari (Asparagus racemosa) but the Chinese herb, dang gui (Angelica sinensis and A. acutiloba), renowned as a blood tonic, is especially beneficial in gynecology for deficient blood conditions, anemia and irregular menstruation. The uniqueness of Ashwagandha is that it achieves its results through strengthening the nervous system and potentiate reproductive hormones. (Reference: American Herbal Pharmacopoeia and Therapeutic Compendium, Ashwagandha Root Monograph, coordinated by herbalist Upton, Roy, President of the American Herbalist Guild, et al. 1996 (pending publication).)

#2: Ashwagandha is used to boost both the male and female reproductive systems. It helps increase sexual desire (libido) and strengthens the reproductive organs. Ashwagandha (Withania Somnifera) has become one of the most popular Ayurvedic herbs in use in the Western world.  And it is no wonder, with all the benefits that Ashwagandha has to offer!  Ashwagandha has been used by Ayurveda for thousands of years as a rasāyana (rejuvenative) and an adaptogenic herb, meaning that it is used to help the body resist physiological and psychological stress. There is a great deal of historical data to confirm the traditional use of Ashwagandha to support a healthy female reproductive system. (Reference: Acharya Balkrishna.  Secrets of Indian Herbs for Good Health.  Divya Prakshan, Hardwar; 2008.  100-102 AND Mahdi, AA et al.  Withania somnifera improves semen quality in stress-related male fertility.  Evidence Based Complementary Alternative Med.  Sept 29, 2009.) 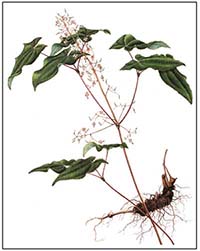 Because goat weed elevates levels of serotonin and dopamine, it plays a key role in women’s sexual response. Higher levels of dopamine help explain goat weed’s effect in better sexual response because high dopamine levels encourage the release of lutenizing hormone (LH) from the pituitary gland. Lutenizing hormone stimulates sex steroid production in the ovaries in women, and testosterone in men.  Serontonin is the hormone that curbs food and alcohol cravings, elevates your mood, reduces pain, and boosts energy.

The exact way that Epimedium works remains unclear. However, animal studies have shown that it may influence levels of neurotransmitters such as norepinephrine, serotonin, and dopamine and reduce cortisol levels. The leaves contain a variety of flavonoids (one prominent one is icariin), sterols and an alkaloid called magnaflorine. It is quite possible HGW influences several aspects of human sexual biochemistry.

Hypoactive Sexual Desire Disorder ( HSDD ) is the most prevalent female sexual dysfunction in society mainly in postmenopausal women, and is strongly linked to the quality of life of women. The androgen hormones decline over age in the premenopausal period, more sharply after menopause. Tribulus terrestris is a plant native to India, recommended in the treatment of infertility, low female libido and impotence in men. Its main active ingredient is the protodioscin, which has been attributed to an increase in testosterone levels and improved sexual function – Federal University of Minas Gerais.

Feminine sexual complaints keep swelling, and a lot of women do not have strong, powerful sex drives. Many women feel responsible for their reduced sex drives, but this couldn’t be further from reality. Chemical imbalances are what really stop you from getting stimulated and taking pleasure in sex. Tribulus Terrestris can be used to correct this.

Tribulus is the secure, gentle way to find or to re-ignite the longing, the thrill and the responses that make sex amazing and gratifying. Touted as the sexual vitality booster for women with all the benefits men have had access to for years, Tribulus is sometimes hailed the “female Viagra.”

#1: Tribulus Terrestris (Puncture Vine) has been used for centuries to stimulate libido in women. This herb may act by releasing nitric oxide from the lining of the blood vessels and nerves which supply blood to the clitoris. Thus, engorgement and increased sensitivity in the clitoris result. A study showed that Tribulus Terrestris supplementation in women improved libido and sexual function among 66% of those women who reported low sex drive and sexual dysfunction. (Source: Natural Support for Sexual Performance & Libido Enhancement in Men and Women. A Research Report by Dr. James Meschino, D.C., M.S., N.D. Clinical Director, RenaiSanté Institute of Integrative Medicine.)

#2: Tribulus has been marketed these conditions because research performed in Bulgaria and Russia indicates that tribulus increases levels of the hormones testosterone (by increasing luteinizing hormone), DHEA, and estrogen – About.com

#3: Using Tribulus for Female Fertility and Ovulation Stimulation –One study performed on 36 women who were not ovulating, showed that that 67% realized normal ovulation after only 2-3 months of consistent use. The women were given 300-400mg a day, from day 5-14 of their menstrual cycle. 6% became pregnant right away. A rat study using Tribulus, published in Aug. 2011, showed that Tribulus reduced the number of cysts in the ovaries, in female rats with PCOS. High doses of the extract were administered orally. The treatment showed the ovarian cysts to have significantly decreased, and normal ovarian function restored. While this was not a human study, it gives scientists more research to use when considering this herb for treatment of PCOS in humans. Many herbalists find Tribulus is an effective, overall female fertility tonic and ovarian stimulant, making it an excellent choice for women with PCOS. This is especially true for women who are not ovulating due to PCOS. This herb has been found to be wonderful in aiding women with menstrual irregularities, improving timing of the entire menstrual cycle. Tribulus has also been found to be a nourishing tonic for the female reproductive system as a whole, especially concerning the ovaries.

#4: Studies performed in Bulgaria are the primary source of most current health claims regarding tribulus. According to this research, tribulus increases levels of various hormones in the steroid family, including testosterone, DHEA, and estrogen, and for this reason improves sports performance , fertility in men and women , sexual function (again in men and women ), and symptoms of menopause (such as hot flashes). 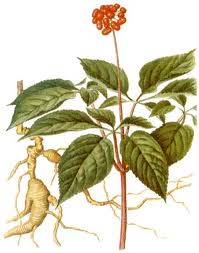 Panax ginseng one of the herbs for female sex drive, is comprised of over 30 different, active glycosides that are thought to be responsible for its potential pro-sexual effects in men and women. In pre, peri, and post- menopausal women, Panax ginseng has been demonstrated, in combination, to improve sexual desire, satisfaction, and vaginal dryness.

Studies involving women are rare, due in part to the difficulty of establishing a standard means of measuring female sexual response. One study reported that a dietary supplement containing extracts of Korean ginseng as well as ginkgo and other ingredients improved the sex drives of female participants. But it is not clear how the supplement worked to enhance function, and further research is necessary to determine the role, if any, of ginseng. Clinical studies using consistent doses of pure ginseng are needed in order to assess the effect of ginseng on female sexual response.

Chinese ginseng, or Panax ginseng, has been used for more than 2,000 years in Chinese medicine for various health conditions. Preliminary evidence indicates that ginseng may be effective in improving the signs and symptoms of erectile dysfunction (ED). Early studies suggest that applying an herbal combination containing Panax ginseng on the penis may help treat premature ejaculation. However, because ginseng was tested with other herbs, its individual effects on sexual function and libido are unclear. Early studies also suggest that a product containing Panax ginseng, L-arginine, Ginkgo biloba, damiana, and multivitamin/minerals may improve sexual arousal in women with decreased sex drives and menopausal women. Studies with Panax ginseng alone are needed before strong conclusions can be made.

The active ingredients in Evedol

Evedol contains our unique proprietary blend of 24 powerful ingredients known for their female libido increasing properties. Here are the complete ingredients found in each Evedol capsule –

As you can see – Evedol was specifically formulated using ingredients which have been proven in numerous clinical studies to boost female libido and enhance several areas of female reproductive health.

We’re so sure that Evedol will work for you, we back every purchase with our infamous 60-day money back guarantee for 100% of your purchase.

You’ll feel more desire, more arousal, and sex that will get increasingly more enjoyable and satisfying the longer you take it. Don’t wait another day – get yours today!